The development team at the car building 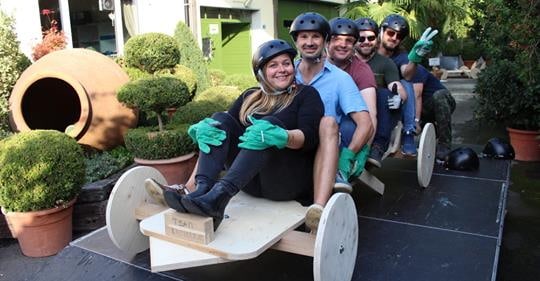 Every year, we organize a team event in the Development team. This year, car building was on the agenda.

Why we decided to build cars?

Various methods and principles that we need every day at Netstream find their origins in the automotive industry. Lean Thinking comes from Toyota and aims at continuous development and optimization of all production processes. Kanban as a working method to increase efficiency and Kaizen as an improvement process can also be found in our daily work.

But that doesn't interest us in the slightest on the day of our team event.

What we had planned for the team event should have remained a surprise. But Sasha and Julian already found out the day before that it was about building cars.

On the day of the team event After lunch, we set off by train, and the post bus (yes they actually still have that in Zurich) to Uitikon-Waldegg.

The event supervisors welcome us, divide us into three teams and announce the task. Each team is given a jigsaw, a cordless screwdriver, sandpaper, a folding rule, five sturdy wood screws, various small wood screws, various washers, a string and two scribes to assist them. The base is a board measuring approx. 240 x 130 cm and two sturdy wooden beams.

The requirements are low: the vehicle must drive, be steerable, offer a braking option and be able to carry at least four team members.

Sounds easy? Maybe at first. Ever made a wheel out of wood and without a compass? We have now. They have become about as round as PacMan on a Comodore64 back then.

The challenge for our development team, however, is this: Five team members with five different approaches, skills, ideas, native languages and different levels of understanding are to build a car in a maximum of two hours that meets the minimum requirements and is of high enough quality to survive the test track and, of course, get everyone to the finish line in one piece.

That is exactly what our daily environment associates with this car manufacturing: Mastering complexity! So we should be very well prepared.

Time is running out. While some want to start slowly with sawing and drilling, others have the need for more accurate conception. However, it is exactly the teamwork and the mix that will make the team successful and the result usable.

After two hours, we are all ready for the test track. But before we get started, we evaluate the design. What's striking is that all three cars are built according to the same concept. The same type of steering, the same braking option and construction.

The first team gets ready. Hard hats are mounted, the maneuver is discussed again. Dom takes over the steering, Sasha the command at the front and Dominik and Marc together the brake. Marko provides the impetus. With relatively much momentum it goes off. Full throttle down the ramp and then it crashes. The axle is broken. But quickly we continue on foot and every screw has to go, because every second counts. In the end, everyone is safe at the finish - except the car.

The second team, at least as nervous, also gets ready. Guenda as bow, Steffen at the steering, Simon as power pack solely responsible for the brake and Julian as well as Meisti as passengers. They decided to use the string as a hippie hair band instead of steering. Whether this was clever? Guenda has fear written all over her face. One last scream and off they go. At the end of the ramp it crashes here too. The axle is broken.

Again, all team members quickly take everything in hand and, all well, walk to the finish.

The third team, with Cinzia in command, Simon at the wheel, Bartosz and Patrick on the brakes and Miguel pushing, is now getting ready. Because the confidence in their own construction is so great, the team dispenses with helmets. And indeed: the axle holds. After two meters it also crashes, but only into the wall. Quick reverse gear (manual) and onward. This time on the vehicle, but really slowly.

But now we've done enough tinkering and are looking forward to the awards ceremony. Team three wins the designer prize and team two the prize for the best test drive. We celebrate this with a team hurrah, beer and a good bottle of Prosecco.

Since we eventually run out of drinks and hunger makes itself felt, we make our way back to the city. In Birmensdorf we take the train to Zurich, where Guenda invites us to her home. Regarding agility we can learn a lot from Guenda's partner. After a short phone call, he has gone without further ado to fill the fridge with cold drinks! Thank you so much! It was a great team event.

More from our blog

We are also committed to bees next year

In 2023, we will again support the interest group IG Biene and take over the sponsorship of several bee colonies. Already in 2021 we have

Our popular Swiss TV platform nello is coming back! A good 18 years ago, we launched adsl.tv, the first streaming portal for real-time TV